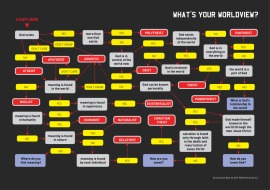 We live in a world where the “default” worldview has been a belief in God (theos from the Greek or deus from the Latin) giving us Deists and Theists. Using this logic, I am therefore an “atheist” in the same way that some people are apolitical, agnostic etc.

However, if we use the same Greek preposition “a” to mean “without”, but this time use the default worldview of “humanism”, we would arrive at what I believe is a new term for those professing a belief in any superior being, bushy-bearded men in the clouds etc etc.

I am a HUMANIST and those with deity-based beliefs are AHUMANISTS.

I have tried googling “ahumanism” and “ahumanist” but only seemed to get results for the obvious “a humanist” so I am still open to knowing whether this is a term which has already been used elsewhere… so answers on the back of a postcard please to… (the comments below!).  It may be due to the fact it is so hard to say  – “You’re a ahumanist”!! It does however become slightly easier in other languages!! “Vous êtes un ahumaniste”, “Es un ahumanista” to use two possible examples from my languages.

We can obviously use the term “non-humanist” in the same way that we use “non-believer” but I don’t think it has the same “clout” as using humanism as the default worldview.

This new term could potentially be a powerful way to underline how rational beings view the world of the 21st century. A world in which science and rationality are mere toddlers compared to the “advanced”, “mature” “adults” of the belief paradigm. (excuse all the quote marksbut you know what I mean!).  I know that the new paradigm will not happen in my lifetime but I for one have started to refer to believers as ahumanists, even if it’s only to either p*ss them off or try (with a big capital T) to get them to think rationally (ahem!).

4 responses to “Ahumanists – Time for a New Paradigm?”